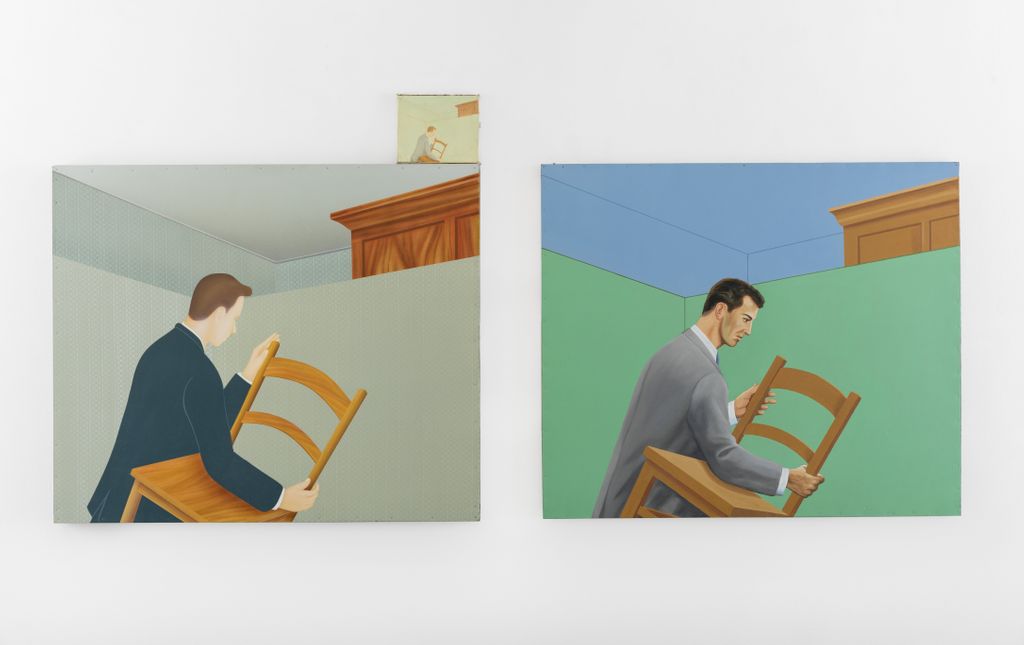 Alÿs confronts issues of globalism through Sisyphean episodes: pushing a block of ice down the streets of Mexico City until it is melted completely in The Green Line (Sometimes doing something poetic can become political and sometimes doing something political can become poetic) (2005); and shoveling a mound of sand from one side of a dune to the other in Lima, Peru, in rotulistas––professional street sign painters––in Mexico City. Alÿs painted small canvases featuring scenes of daily life in Mexico—everyday objects, people (typically suited men), and urban architecture—in the style of billboard advertisements, and later commissioned the rotulistas, the project deliberately compromises a clear sense of authorship and confounds the market system in its ability to assign value. In a monograph on the series, anthropologist Néstor García Canclini described these collaborative works as “documenting insignificant things that are neither productive nor startling, all within deliberately unremarkable contexts . . . [in which] one can scarcely tell where it happens within the painting field, the realm of performance or the interface between advertising and art.”

rotulista Emilio Rivera, which hangs beside Juan García’s adaptation in the same medium. With a shift in scale, style, and detail, both interpretations display a divergence from Alÿs’s original. Rivera’s adaptation is softer in tone, and suggests that the chair is being intimately held and examined by the man carrying it, while García’s renders the man tightly gripping the chair as he moves it. This collaborative work exemplifies Alÿs’s endeavor to understand and account for a multitude of viewpoints and interpretations of the same situation that stem from different experiences and cultural backgrounds, while pointing to the importance of visual and communal exchange.