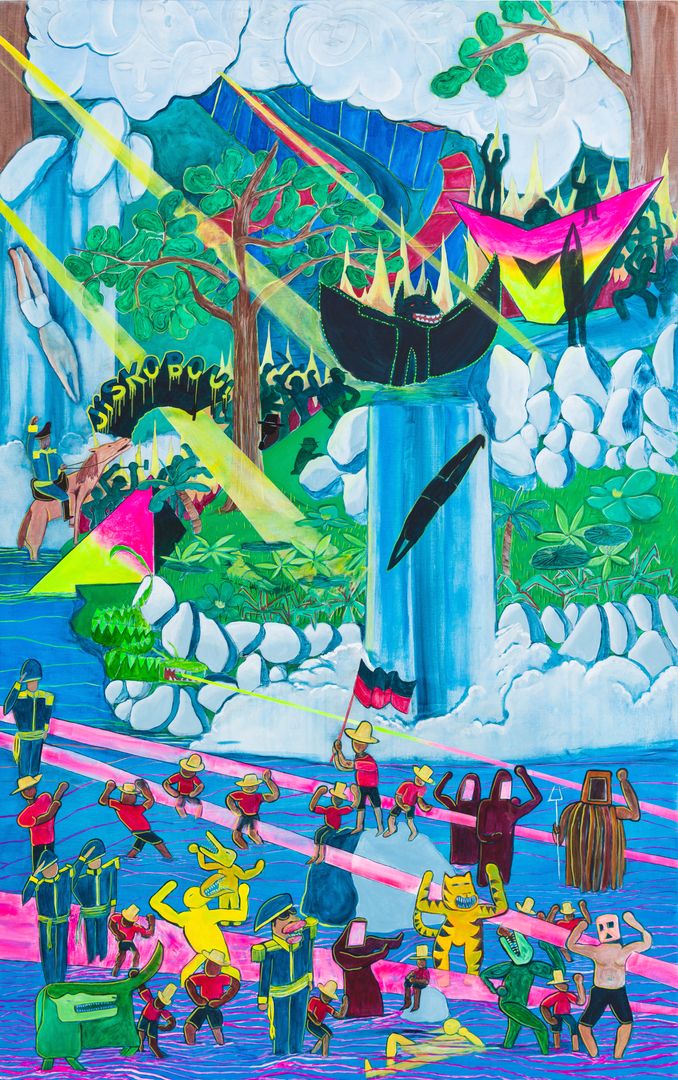 An epic representation of Haitian history, Jiskobou (Until it’s done) centers on figures celebrating amid a waterfall and beams of light as a revolution unfolds. Chaos ensues in the background while farmers and soldiers in colonial uniforms seem to dance alongside popular Haitian carnival figures such as Chaloska—a sinister creature based on the early twentieth-century military officer Charles Oscar Etienne, who was responsible for the murders of political prisoners in the Haitian town of Jacmel. The work’s title, the Kreyol phrase “jiskobou,” which means “until it’s done” or “right to the end,” is a reference to democracy and liberation as an active social experiment. For those who dreamed of and ultimately carried out the Haitian Revolution, the phrase suggests a level of certainty in what the future holds.

Viktor El-Saieh (b. 1988, Port-au-Prince, Haiti) holds a BA in international affairs from the University of Miami and studied painting at the André Pierre studio in Port-au-Prince. He has held three solo exhibitions at Central Fine Gallery, Miami Beach (2020, 2017, 2016), and has shown at the Ghetto Biennale, Port-au-Prince (2015), and David Castillo Gallery, Miami (2010), among others. El-Saieh’s work is part of the collections of the Institute of Contemporary Art, Miami, and Pérez Art Museum Miami. He lives and works in Denver.