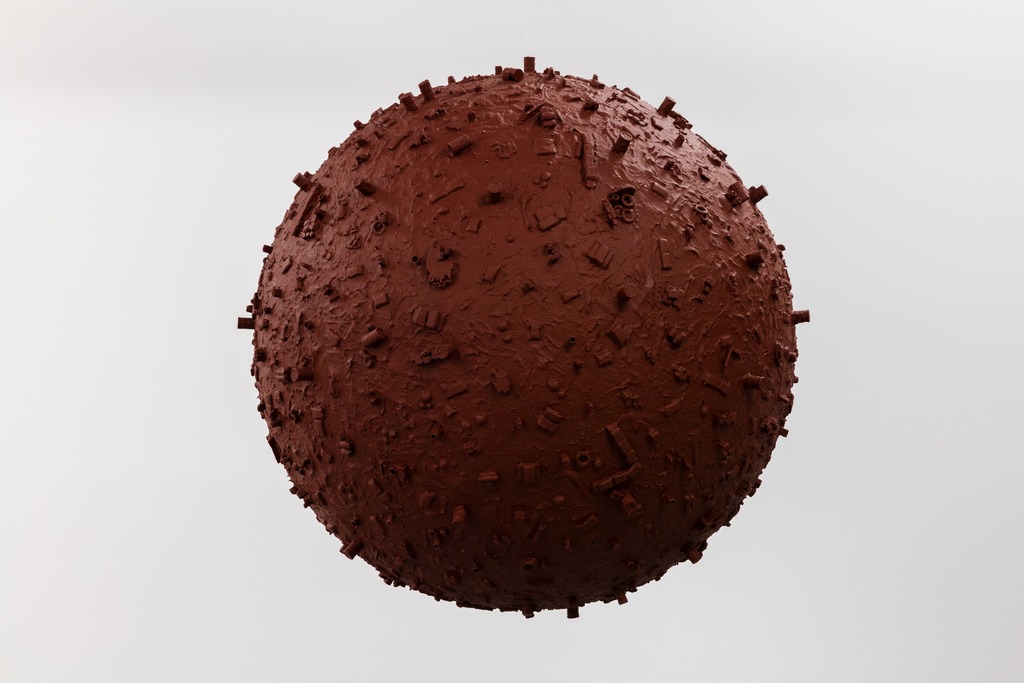 John Miller (b. 1954, Cleveland) is an artist-critic whose work involves psychological and sociological investigations of Western consumer society. Working in the tradition of conceptual art, in series and with recurring motifs, Miller’s practice frequently explores the banality of human and social desire to accumulate and possess objects. Over the three decades of his practice, this inquiry has manifested in a long-running series of paintings of reality television programs and photographs of urban life during lunchtime.

Storage Area is related to Miller’s well-known series of relief sculptures and assemblages, for which he appropriates everyday objects and waste material, appending them to basic forms. In 1986, he began smothering these arrangements with brown impasto; in 1989, he shifted this treatment to gold leaf. The transition invokes the Freudian association of excrement and money. This comparison evokes a critique of commodity and production values and relations that underpin the art market and pop culture.

Storage Area (1993) follows the artist’s spherical work World Without End (1990), both are covered in HO-scale 55-gallon drums, traditionally found in model train sets. With deadpan humor, the sphere, enshrouded in brown impasto, obscures the useful information typical of a globe. Storage Area’s use of children model railways reflects the proliferation of mass produced objects that exist in two states: as symbols of material products in a capitalist society and plastic duplicates of “real” objects found inside a child’s playroom. His manipulation of scale suggests a depopulated world littered with the remains of middlebrow culture.

Storage Area was included in Open Systems: Works in MOCA’s Permanent Collectionat MOCA North Miami (June 7, 2013 – September 8, 2013), curated by Alex Gartenfeld; and Pivot Points IV (September 16- November 7, 2010) co-curated by MOCA Executive Director and Chief Curator Bonnie Clearwater and MOCA Associate Curator Ruba Katrib. Miller has presented solo exhibitions at Museum Ludwig, Cologne; Kunsthalle Zürich, Zürich; The Kitchen, New York; and White Columns, New York. His work has been featured in group exhibitions at The Museum of Modern Art, New York; Palais de Tokyo, Paris; and Institute of Contemporary Art, Philadelphia; among others. Miller participated in the 46th Venice Biennale in 1995; the Whitney Biennial in 1991 and 1985; the Gwanju Biennial in 2010; and the Kitakyushu Biennial in 2007 and 2011. His work is in the permanent collections of The Whitney Museum of American Art, New York; Museum Ludwig, Cologne; Carnegie Mellon Museum, Pittsburg; and Museum of Contemporary Art, Los Angeles.

John Miller: I Stand, I Fall