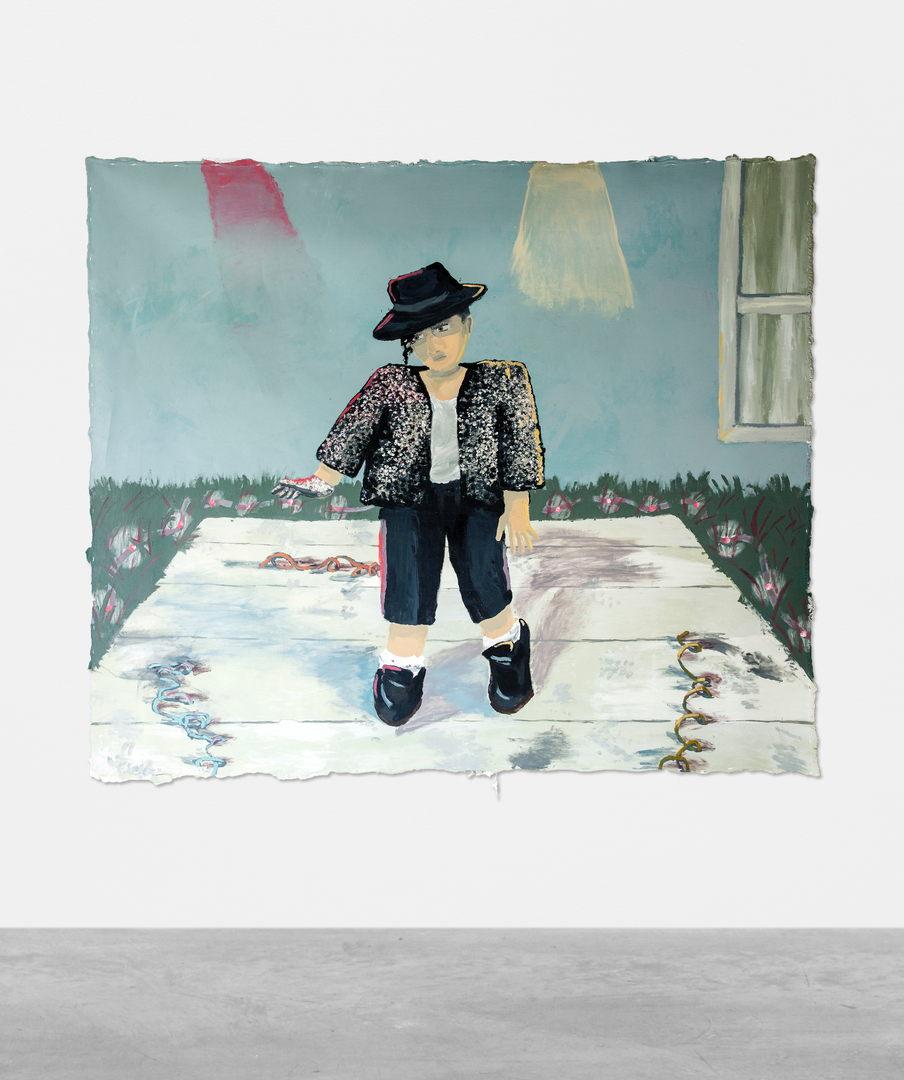 That art and images are central to the construction of our perception and to our lives is crucial to Manuel Solano’s practice. Working across mediums, Solano explores issues of identity and its formation by drawing from their personal life, memories, and popular culture. Following Solano’s loss of sight at age twenty-six due to an HIV-related illness, they created the series “Blind Transgender with AIDS” (2014) as part of an effort to begin recreating a visual arts practice after becoming blind. Using pipe cleaners, tacks, and threads—tactile markers to use as guides—Solano invented a system that allows them to create paintings from memory.

The self-portrait Manuel depicts a makeshift stage in the artist’s childhood backyard. At center, a young Solano is dressed up in Michael Jackson’s “Billie Jean” outfit: dark curly hair under a wide-brimmed black hat, sequin jacket and sequin tuxedo pants, black loafers with white socks, and the signature single sequin glove. Timidly mimicking the pop icon, Solano takes on Jackson’s complex persona to explore performed identities. Manuel is one of four large-scale paintings from the series “Pose.” Other works in the series feature Jackson dancing, a close-up of the pop star’s feet moonwalking in white socks and black loafers, and the orca star of the 1993 movie Free Willy. In Solano’s paintings, these 1990s icons’ performances are emphasized by a large, otherwise empty stage. Like many of Solano’s works, this series features motifs from popular culture moments that were formative to the artist’s coming of age before losing their sight. The artist explains, “I didn’t realize how personal my work was until I became blind. I see now that it was always about me, my loneliness, my feelings of not fitting in.”

Manuel Solano: I Don’t Wanna Wait For Our Lives To Be Over

Manuel Solano: I Don’t Wanna Wait For Our Lives To Be Over