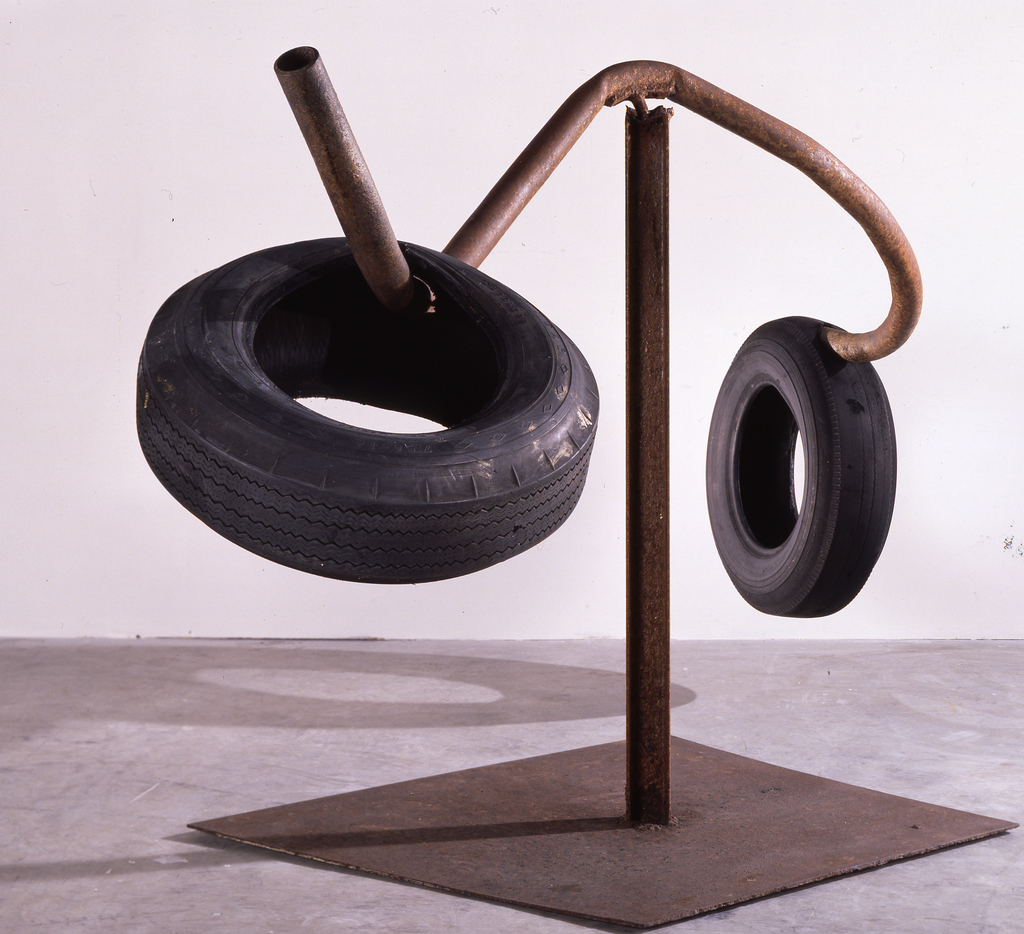 Since the late 1950s Mark di Suvero has been one of America’s most significant sculptors, known particularly for his innovation with large-scale public works. Immersing himself in New York’s downtown art scene in the early 1960s, di Suvero constructed his early works from salvaged urban detritus. Bold combinations of cast-off wood planks, chains, steel scraps, and rope expressed tension rather than the sense of equilibrium that was representative of traditional sculpture. In 1960 di Suvero was injured in a construction accident that put him in a wheelchair for a year, a time during which he learned to weld. Subsequently, he would explore the scale of the modern city, creating outdoor sculptures from welded and bolted steel I-beams.

Untitled energizes the space surrounding it. The delicate play of balance evokes the kinetic mobiles of Alexander Calder. By twisting coarse, industrial materials into seemingly floating lines, di Suvero creates an arch-like shape suggesting motion, much like the brushstrokes of the Abstract Expressionists who inspired him.

Di Suvero has also maintained a deep commitment to engaging public communities through art. In 1966, with architect Kenneth H. Dillon, he designed the Peace Tower in Los Angeles, a collaborative project made in protest of the United States’ involvement in the Vietnam War that presented works contributed by hundreds of artists. Di Suvero cofounded the Park Place Gallery in New York in 1963 to provide a platform for emerging artists and established the Athena Foundation in 1977 to give artists work space and funding to realize projects. In 1986, he created Socrates Sculpture Park, a vast outdoor exhibition venue and park in Queens, New York.

Born in Shanghai in 1933 to Italian parents, Mark di Suvero moved to San Francisco in 1941. After studying philosophy and art at the University of California, Santa Barbara, di Suvero transferred to the University of California, Berkeley, in 1955, where he received a bachelor’s degree in philosophy before moving to New York in 1957. Opposing the American-led war in Vietnam, di Suvero emigrated to Europe in 1972, staging several pivotal exhibitions there, including at the Stedelijk Van Abbemuseum in Eindhoven, the Netherlands, and the 1975 and 1995 editions of the Venice Biennale. He was the recipient of the Heinz Award for the Arts and Humanities in 2005, and has been honored with the Lifetime Achievement in Contemporary Sculpture Award from the International Sculpture Center in Hamilton, New Jersey. Di Suvero’s work can be found in leading public collections worldwide, including the Hirshhorn Museum and Sculpture Garden, Washington, DC; National Gallery of Art, Washington, DC; Moderna Museet, Stockholm; Los Angeles County Museum of Art; Metropolitan Museum of Art, New York; and the Museum of Modern Art, New York. He lives and works in New York and maintains studios in France and California.