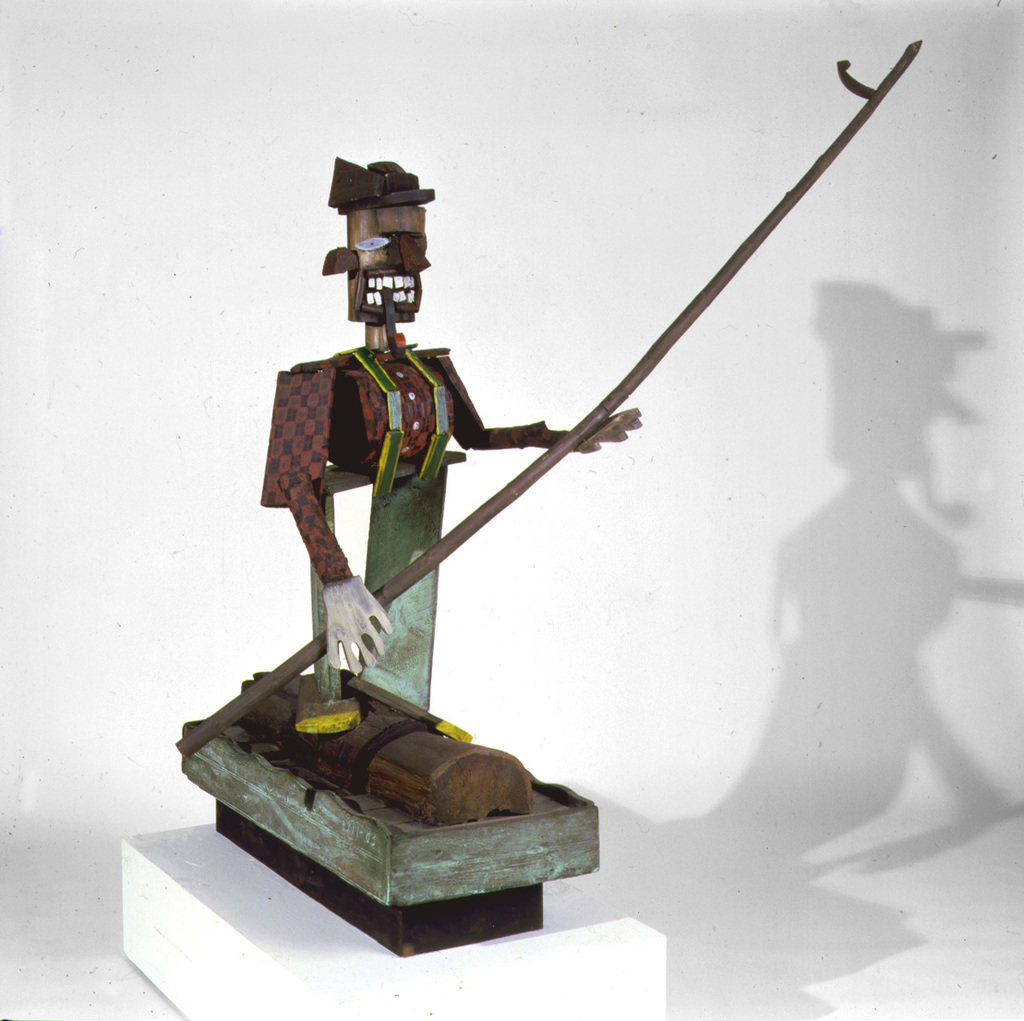 Red Grooms is an American artist who explores scenes of urban life through his singular, colorful Pop art paintings and sculptures, approaching his subjects through caricature and exaggeration. Born in the midst of the Great Depression in Nashville, Grooms moved to New York in 1956, enrolling in the New School for Social Research as well as studying painting under Hans Hofmann at his eponymous School of Fine Arts.

Grooms’s “sculpto-pictoramas” are his most iconic body of work. These intricate, labor-intensive three-dimensional assemblages meld both painting and sculpture, featuring his cartoonlike characters in mundane scenes of everyday life with an absurdist quality that highlights his whimsical sense of humor. Grooms belongs to a generation who “took the world too seriously not to be amused by it,” as Pop art defining critic G. R. Swenson observed. The near life-size sculpture Lumberjack continues the artist’s interest in depictions of American archetypes. Rendered in Grooms’s distinctive caricature style, the figure features stereotypical attributes of a logger: a checkered shirt, pipe dangling from his mouth, long pole in his hand, and one foot resting on lumber as he appears to be floating down a river. Made of bronze, the figure’s deconstructed features are like a caricature of a Cubist sculpture, contrasting this icon of American vernacular culture with references to modernism and its edict against figuration.

Works by Red Grooms (b. 1937, Nashville) have been widely exhibited across the United States and internationally, including solo exhibitions at the Hudson River Museum, Yonkers, New York (2016); Memphis Brooks Museum of Art, Memphis (2016); Yale University Art Gallery, New Haven, Connecticut (2013); and Brattleboro Museum and Art Center, Vermont (2013), among others. He has participated in group shows at the Museum of the City of New York (2017); Pennsylvania Academy of Fine Arts, Philadelphia (2016); the Brooklyn Museum (2016); and MoMA PS1, Long Island City, New York (2015), among others. In 2003 Grooms was awarded the Lifetime Achievement Award by the National Academy of Design. His works are part of the collections of numerous museums, including the Art Institute of Chicago; Museum of Modern Art, New York; Whitney Museum of American Art, New York; Metropolitan Museum of Art, New York; Cleveland Museum of Art; and the Carnegie Museum of Art, Pittsburgh.