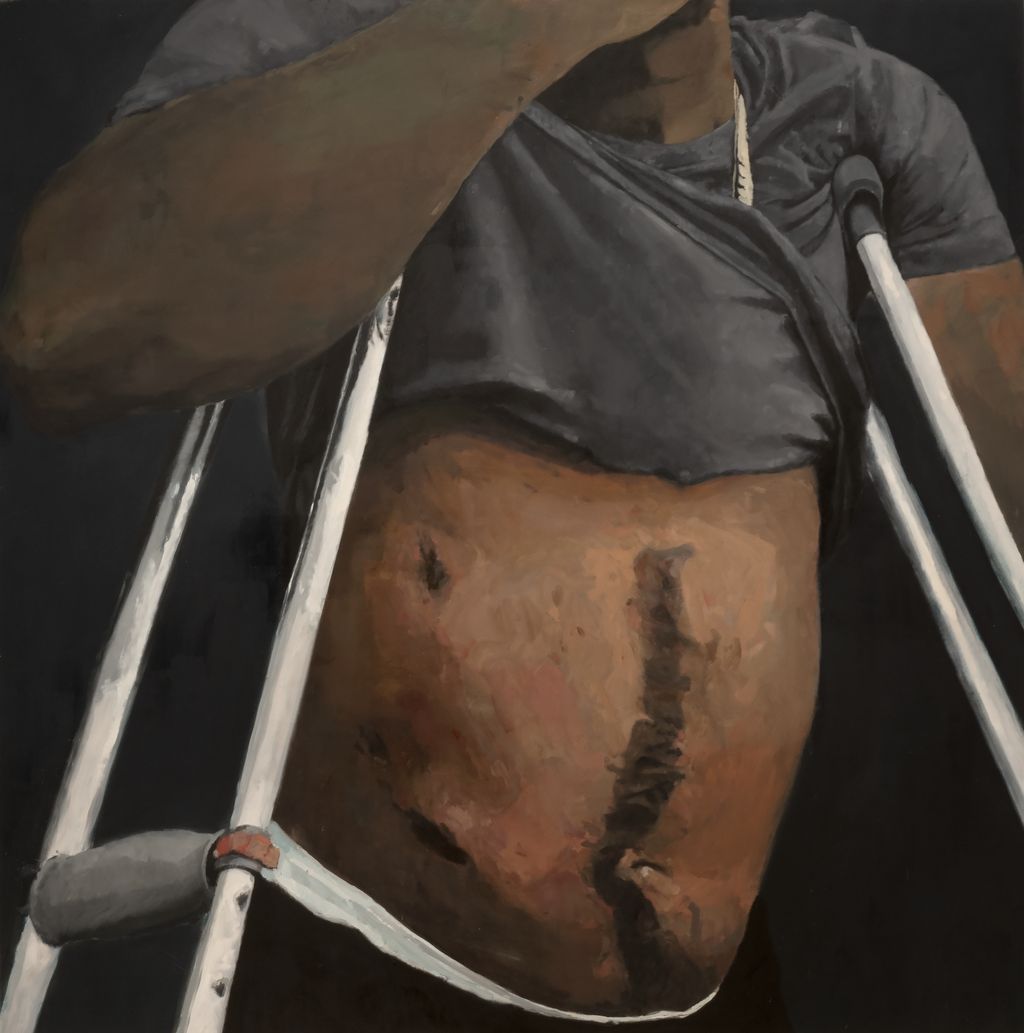 Reginald O’Neal’s still-life and figurative paintings reflect his own life and those of his family members in Miami. O’Neal grew up in Miami’s Overtown neighborhood, a historically Black neighborhood whose thriving cultural life was devasted by the construction of major highways through the heart of the neighborhood in the 1960s, displacing thousands of residents and severing the entire community. Based on the experiences of close family members, formative memories from childhood, historical photographs, as well as personal and community narratives, O’Neal’s work reflects the violence but also the love that marks the life in his neighborhood.

Zipper (2018) depicts a man’s torso, cropped, painted from a photograph form the artist’s archive. With his shirt lifted and the arms resting on crutches, the unnamed man’s stomach is marked by a massive surgical scar. The title may refer to “zipper” as a term used for a scar that often results from gun shots in the stomach and the subsequent removal of the bullets. The larger-than-life scale of the wound confronts the viewer with the violence that Black bodies face. O’Neal has described his practice as a “desire to embrace the unappreciated, defaced and misrepresented, as well as illustrate the true beauty within my community.”

Reginald O’Neal (b. 1992, Miami) has presented a solo exhibition at the Rubell Museum, Miami, and participated in a group exhibition at the Museum of Contemporary Art, North Miami. He attended the Bed-Stuy Art Residency, New York, and the Laundromat Art Space Residency, Miami, and has participated in numerous mural programs around the world, from Italy and Indonesia to Cuba and the Dominican Republic. His films have been featured at Sharjah International Film Festival, Dubai; Ann Arbor Film Festival, Michigan; Miami Short Film Festival; and the Smithsonian African American Film Festival, Washington, DC. His work is also held in the permanent collections of the Rubell Museum and Pérez Art Museum Miami. O’Neal lives and works in Miami.