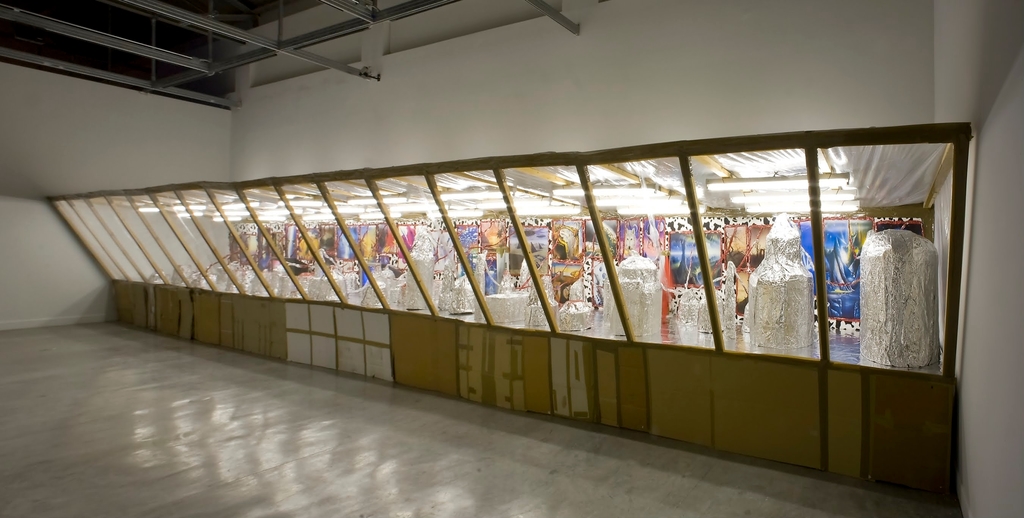 Thomas Hirschhorn (b. 1957, Bern, Switzerland) works in a variety of media and modes of social art practice. Best known for his series of “monuments”—public installations devoted to notable philosophers, including Georges Bataille and Antonio Gramsci, constructed from ephemera and detritus—Hirschhorn’s works often approach complex sets of theoretical references with prosaic materials and imagery. Engaging notions of formal and philosophical precariousness, the artist questions our relationships to politics, history, and form through aesthetic experiences that manifest both inside and outside the museum.

In Diorama (1997), the artist employs a type of wood and glass vitrine common to natural history museums, filling it with a tenuous construction of cardboard boxes, packing tape, aluminum foil, and Plexiglas. This collection of “artifacts” resembles a science-fiction fantasy scene gone awry: the ambiguous foil sculptures evoke both spaceships and fast-food leftovers, and are set against colorful kitsch paintings depicting aliens, dolphins, and more recognizable Surrealist imagery. Vibrating in the illumination of fluorescent bulbs and television sets, these objects recall smoke shop and cheap electronics store displays rather than those of a fine art museum. Whether institutional parody or late capitalist critique, in challenging the conventions and expectations of museological display, Hirschhorn’s ersatz diorama approaches the museum as a site of spectacle and introduces the excess and waste of contemporary consumption to the sacrosanct space of art. Diorama was previously exhibited at the Museum of Contemporary Art, North Miami, and at Künstlerhaus Bremen, Germany.