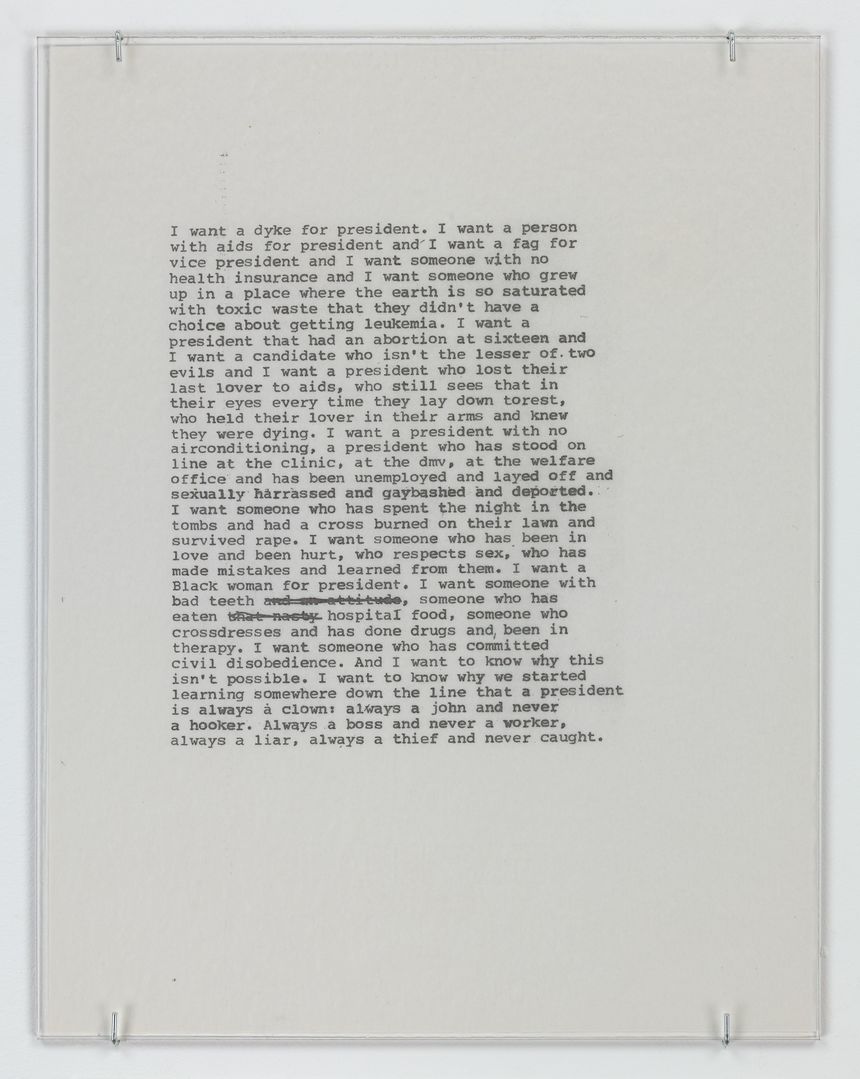 Zoe Leonard is widely acclaimed for foregrounding the identity-making power of photography. Many of her photographs classify, frame, and order visual materials into object schemas—associating like with like, and drawing similarities between related subjects. Leonard’s approach often assigns significance to urban imagery—storefronts, graffiti, signage, and clubs. Frequently using New York City as a symbol, the artist has subsequently turned her attention to popular culture worldwide, meditating on globalization and geography. In a significant work created for Documenta IX (1992), Leonard removed all the paintings depicting men from the walls of the Neue Galerie in Kassel, leaving only those featuring women. These vacant places were replaced with small, close-up black-and-white photographs of the artist’s friends’ vulvas. Leonard has frequently engaged activist groups including ACT UP, GANG, and Fierce Pussy that create a link between radical action and visual representation.

Originally conceived in 1992, I want a president (1992/2018) was created in response to poet and activist Eileen Myles’s presidential bid against incumbent president George H. W. Bush, Democratic nominee Bill Clinton, and independent candidate Ross Perot in 1991–92. Myles’s candidacy and her advocacy for the rights of minorities stood in sharp contrast to her mainstream, wealthy male opponents, and exposed the cruel indifference of the US government in the face of the AIDS crisis of the 1980s and early 1990s. With its iconic opening line, “I want a dyke for president,” the poem has been a rallying cry for feminist, queer, and social justice activists for nearly three decades. Its 2018 reprint still reads as a call to action to see a more diverse range of elected officials wielding power. The artist explains: “It’s about saying that you want the world and the people in power, people that are making decisions that affect our lives, you want to feel like they know what it is to not be cared for, they know what it is to truly suffer, they know what it is to be on the other side of things. You want someone in the White House to understand that.”

Zoe Leonard (b. 1961, Liberty, New York) received the 2014 Bucksbaum Award from the Whitney Museum of American Art, New York. Her work has been featured in international solo exhibitions including at the Art Institute of Chicago; The Kitchen, New York; Museum of Modern Art, New York; MoMA PS1, Long Island City; MUMOK Museum of Modern Art, Vienna; and Tate Liverpool. Leonard’s work is held in the collections of the Dallas Museum of Art; Denver Art Museum; the National Gallery of Art, Washington, DC; Philadelphia Museum of Art; Tate Modern, London; and the Whitney Museum of American Art, among many others.