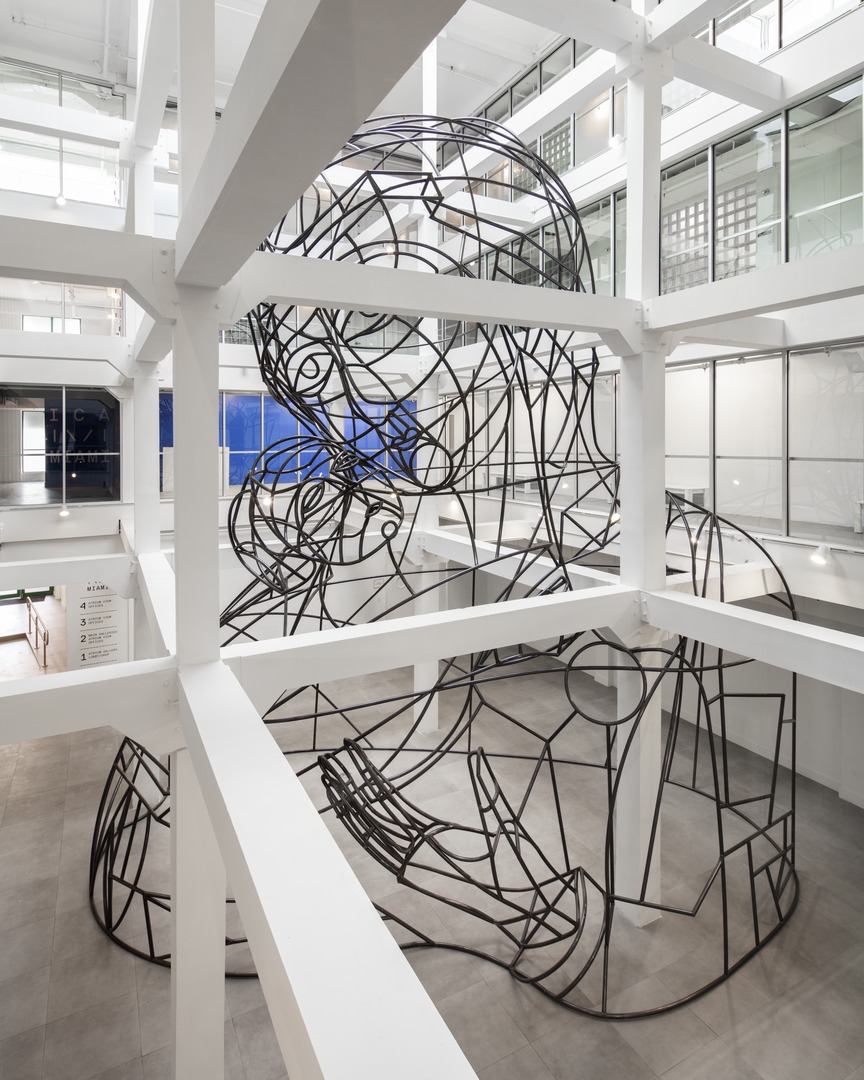 Wire Madonna, a site-specific commission by ICA Miami for its Atrium Gallery in the Moore Building, is the most significant monumental sculpture by Thomas Bayrle to date. The theme of the Holy Family—foundational and ubiquitous in religious iconography, yet atypical in contemporary art—has appeared in Bayrle’s paintings, screenprints, collages, and sculptures. For Bayrle, the pervasiveness and power of such traditional icons persists today in new forms through popular images.

The artist attributes his interest in the subject of Madonna and child to a 1985 trip to Russia, where he visited Our Lady of the Sign, a famed twelfth-century Orthodox icon in the city of Novgorod that receives thousands of kisses from worshipers each day. In Byzantine art, the formal features of the icons are fixed, having been copied meticulously for centuries to create an existential connection between the onlooker and God. “At first glance these Madonnas appeared to me like ancient machines: everything was coded, quoted and copied, on and on, and even mass-produced at certain times,” Bayrle says. “At the same time I felt their total singularity.”

Scaled up from a tiny stamp the artist created in 1987, Wire Madonna towers over 33 feet high and was engineered in steel tubing by Miami design studio Office GA. Playfully hybridizing manual and digital executions is key for Bayrle, who seeks an uncanny result.

Thomas Bayrle (b. 1937, Berlin) is a Frankfurt-based artist whose sublime, humorously political works span mediums and movements including Pop, Op, and Conceptual art. His best-known works are his “super-forms,” complex images comprising many tiny, densely montaged patterned parts. Influenced by the social and economic backdrop of his adolescence in postwar Germany, Bayrle was trained as an industrial weaver, an experience that shaped his approach to physical labor and form, pattern, and repetition. Bayrle has frequently undertaken themes associated with the political left, but has also collaborated with large corporations including Ferrero and Pierre Cardin on inventive branding projects. A professor for three decades at the renowned Städelschule art academy in Frankfurt, Bayrle has influenced generations of artists through his work and teaching.

Wire Madonna was commissioned on the occasion of Bayrle’s first American museum exhibition, “One Day On Success Street”(November 29, 2016–March 26, 2017).