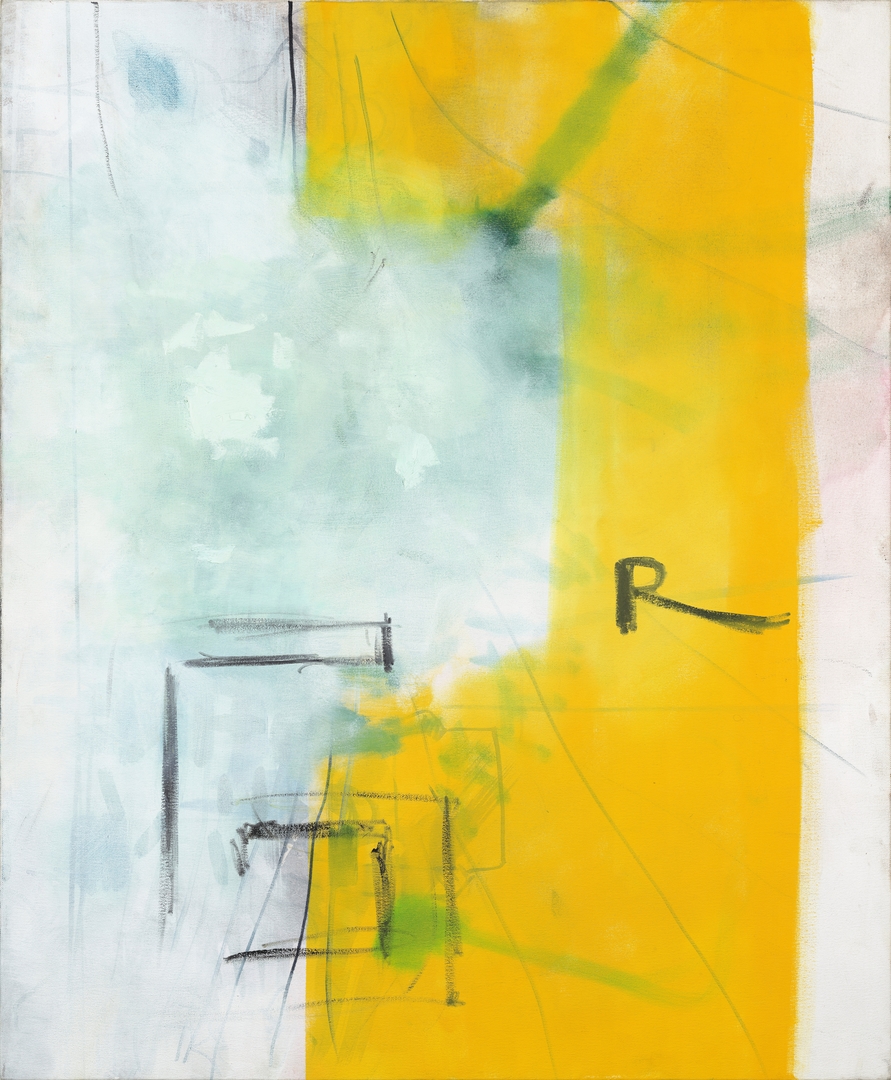 The poles of collectivity and alienation have long been fundamental to Thomas Eggerer’s work, from cooperative projects with his former Munich Academy of Fine Arts classmate Jochen Klein in the early nineties to joining the activist artist collective Group Material in New York in 1995. Eggerer’s studio practice, by contrast, explores dislocation, alienation, and uncertainties of collectivity. Most recently Eggerer has created dreamlike images depicting crowds in ambiguous, often groundless spaces that move between abstraction and figuration. Anonymous yet archetypal groups of schematically contoured bodies appear unmoored from their abstract settings and fragmented from one another by enveloping passages of atmospheric color.

G r suspends roughly sketched letterforms—an uppercase G and a lowercase r—amid monochromatic color, afloat in painterly flux, without cohering into an intelligible form. While devoid of the faceless subjects that populate most of Eggerer’s works, G r employs the same discontinuity of figure and ground that characterizes his more illusionistic paintings. The shape of the G emerges from a foggy stain of gray-blue and cuts into an overlaid wash of yellow, on which the r is boldly inscribed. Both swathes of overpainting mask a background of loosely drawn perspectival lines.

The work might be self-referential: the two letters may reference the two consonants of the artist’s last name, which can evolve into a challenging tongue twister for a native English speaker. Devoid of its vowels, the name also suggests an onomatopoetic growl (“Grrr!”), revealing the artist’s dry sense of humor.

Thomas Eggerer (b. 1963, Munich) lives and works in New York. Eggerer studied at the Academy of Fine Arts, Munich, before moving to the United States on a DAAD scholarship. In addition to his work as a member of Group Material, Eggerer has participated in numerous exhibitions at institutions such as MUMOK, Vienna; Museum Brandhorst, Munich; Museum of Modern Art, New York (MoMA); San Francisco Museum of Modern Art; Museum fur Gegenwartskunst, Basel; Artists Space, New York; Hammer Museum, Los Angeles; and the Lyon Biennial. His work is included in the public collections of MoMA; Museum of Contemporary Art, Los Angeles; ZKM Karlsruhe; San Francisco Museum of Modern Art (SFMOMA); Hammer Museum; and the Dallas Museum of Art.